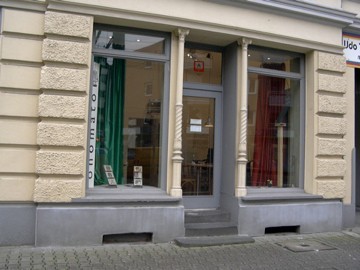 A publishing house as an artistic project *

In the interplay of an audio book culture based on the characteristics of ›oral tradition‹, a book program, public events and the environment of an artist group, onomato Verlag developed as an example of a form of transmission, an open tradition and the art of memory. It is thus also a social experiment on a small scale.

Through an audio book culture that ties in with the oldest, quality features of the ›oral tradition‹, it seems possible to make voices, which are known by name but rarely ›in use‹, perceptible again and for life to win. The speakers correspond more to the image of traders who, by virtue of personal 'repetition' and adaptation, provide effective mediation.

From the initially pure audio book program, a book program developed based on this character. A reference context began to emerge: lines and resonances in the open form of a tradition, in the paradox of the transferability and incompleteness of thought.

Mind you: It is not a programmatic approach that emerges here, but an example of a 'transferability', as Walter Benjamin characterized with a view to Kafka as a further development of tradition in the modern age. “Kafka”, said Benjamin, “had to reveal the truth in order to save the transferability”.

'Surrender' here does not mean 'give up', but rather emphasize and put it in the open. The ineluctibility of thinking is the inevitable in the plural form of a tradition, from which something like a ›musicality‹, the horizon of meaning of what is now an “open sea” (Nietzsche), as it were, could emerge. Hannah Arendt describes the fruitful paradox of an open as well as active tradition in an essay on Benjamin:

“Walter Benjamin knew that a break in tradition and a loss of authority were irreparable, and from this he drew the conclusion to look for new ways of dealing with the past. He became a master of this when he discovered that the ability to pass on the past had been replaced by citability, and that authority was replaced by the ghostly power to settle bit by bit in the present. (...) In place of the obligatory truth came what was in some sense significant, meaningful; and that of course meant, as Benjamin well knew, that "the consistency of truth ... has been lost. (...) 'Truth', he says, shortly before the incurable breach of tradition and loss of authority entered his full consciousness, 'is not revelation that destroys the secret, but revelation that does it justice.' "

A transferability in this sense requires a design, forms, a ›social sculpture‹, or, as in this case, a publishing work - which brings the ›archive‹ to life and brings people closer. With this in mind, onomato Verlag is expanding its range. 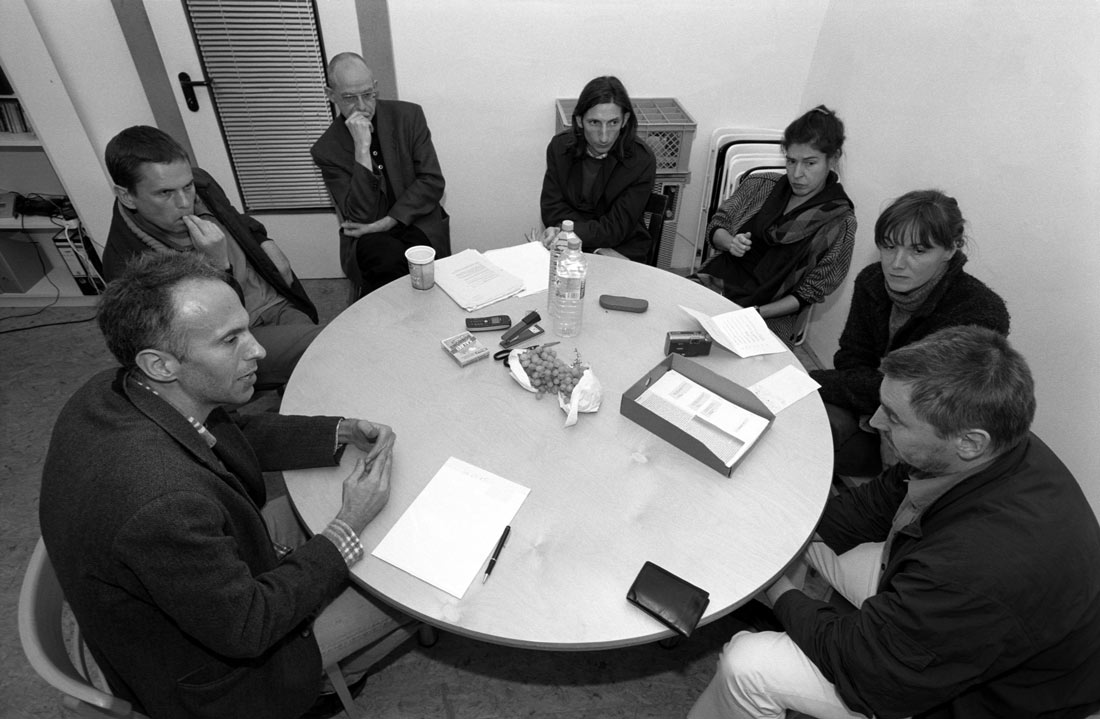 A new form of tradition in the modern age

The development of a new culture of tradition is a basic motif of our publishing work. With its books and audio books, the appearance of a reference context, a culture of reading aloud following oral tradition and the environment of an artist group, onomato Verlag appears as an experiment in testing a new form of transferability. It is the attempt to create an art of remembrance as a form of a 'repetition' that is both sustaining and open. It is the passion to contribute to a meaningful sustainability of the mind in an ›open dialectic‹.

It turned out like this: that our work is ultimately about creating meaning. The ridicule of such a motive seems understandable. But just think of the longing almost, which is expressed in the career of a term such as sustainability: In the acceleration everywhere there is still something to grasp.

In the form of an art of remembrance, it seems possible to us to understand long-lasting undercurrents, transverse to the usual attributions, to visualize a kind of "dormant knowledge" of the human mind, to short-circuit the previous with the current, to record preliminary work, to redesign it and to make it sensually tangible .

We are building on personalities such as Hannah Arendt and Walter Benjamin. After the authoritative traditions have been overcome, they point out, “new ways of dealing with the past” (Arendt) are required. Essential moments of living together, one ethical musicality about, an overarching sense of purpose, yes encouragement (Holderlin), grow out of poetic memory. Benjamin speaks of the Citability, Franz Kafka from one new Kaballa (In the literal sense Lore). Wittgenstein also describes ethics as transcendental, as an echo of poetic perspectives in relation to the inexplicable.

Traditions and moments from all times and cultures can be remembered, analogized, set in relation and used for personal development. “Our whole existence”, says Musil, “is only an analogy.” Never again would a script, a single scriptureto block the view. This does not mean in any way denying the regional, family and religious atmospheres, but rather bringing them to life through free repetition, reference and self-understanding: "That is why the most dangerous of goods, language, is given to people ... so that they can testify what they are ..." (Friedrich Holderlin) 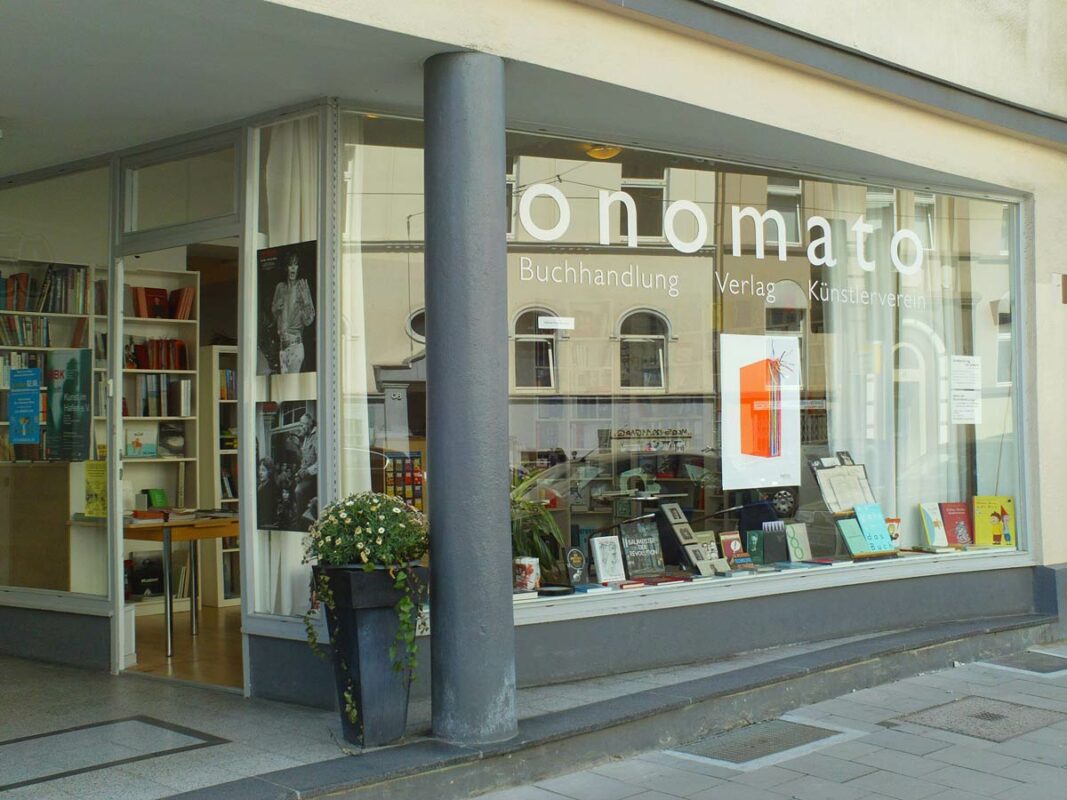 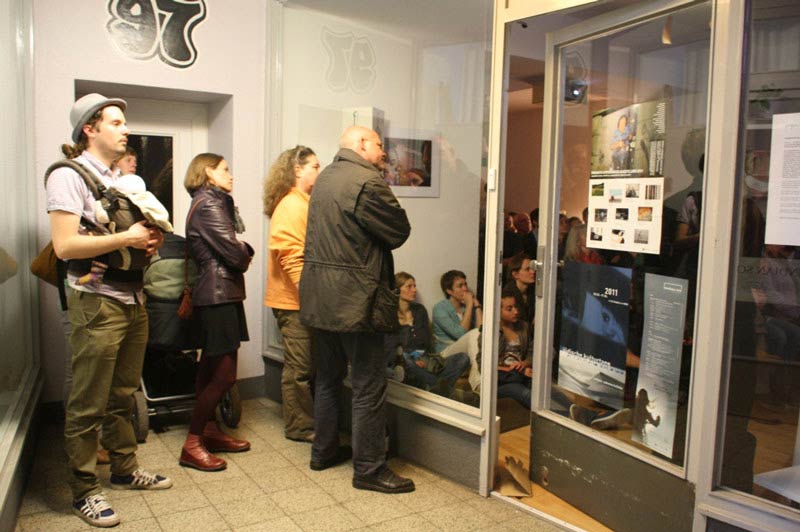 "Where is God ... have we drunk the sea?" Nietzsche's worried exclamation is at the same time the prelude to the free spirit: “... finally the horizon appears free again, assuming that it is not light, finally our ships are allowed to sail again, every risk of the cognizer is allowed again, the sea, ours The sea is open again, maybe there has never been such an 'open sea' ” 4.

In the recording of the elder who oral tradition - we also speak of one aural lore - the culture of reading aloud appears in the image of the traders of oral tradition. By virtue of a personal penetration when dealing with the content for a long time, the speakers reproduce the texts and so often make them tangible: “The most understandable thing about language is not the word itself, but tone, strength, modulation, speed with which a series of words are spoken - in short, the music behind the words, the passion behind this music, the person behind this passion: everything that is not  can be written "5.

The resumption of an ›aural tradition‹ is also formative for the open, plural form of something that can be passed on. The traders of the oral tradition were not faithful to the work. In dealing with the traditional, they felt free to rearrange or paint the stories according to their taste. Of the absolutely individual, the radical individuality - here the everlasting moment of incompleteness lies in a collective memory, the always free perspective in the tradition of what can never be generally determined, but is always admitted or denied anew by every reader or listener got to"6.

On the other hand: Images and narrative patterns, the atmosphere and the motivation of the narratives have been preserved over millennia and across all cultures. In this paradox - or rather complement of freedom and constancy, incompleteness and certainty, the method of a new form of tradition appears. A method that is rooted in poetry itself.

Thus a poetic methodology of the unknown, described by Simone Weil, Wittgenstein and Kafka, seeks to assure itself of a reason without establishing it, itself to that Indestructible (Kafka), to get in touch with the somewhat cheerful paradox of an open certainty, at least to explore it, or, in a word from Michel Foucault, in the sense of a open dialecticto reveal a positive unconscious of the ubiquitous knowledge.

In a methodology and culture of universal-poetic thinking, the possibility of a free, cosmopolitan form of reassurance appears that also understands how to integrate religious currents and feelings in its relationship to the unknowable.

Onomato Verlag is more of an experiment than a commercial enterprise in developing such an art of remembrance; emerged almost unintentionally from a passion for things ... - and now we are following with interest what it may mean for an entrepreneurial culture to start out more from things themselves.

Here, also in the vicinity of the onomato artist circle, a form emerges in which the mentality of economic activity is part of the artistic expression. The cooperation in the interweaving of artist group, family business and elective affinities for the development of a new art of remembrance and tradition may in this sense as one social plastic, like yourself as a artistic project be understood.

This is how we understand the publication of our audio books and books, now also the design of connecting forms as in the ›library kepos‹, in the sense of a new, encouraging, meaningful - also soothing - tradition. 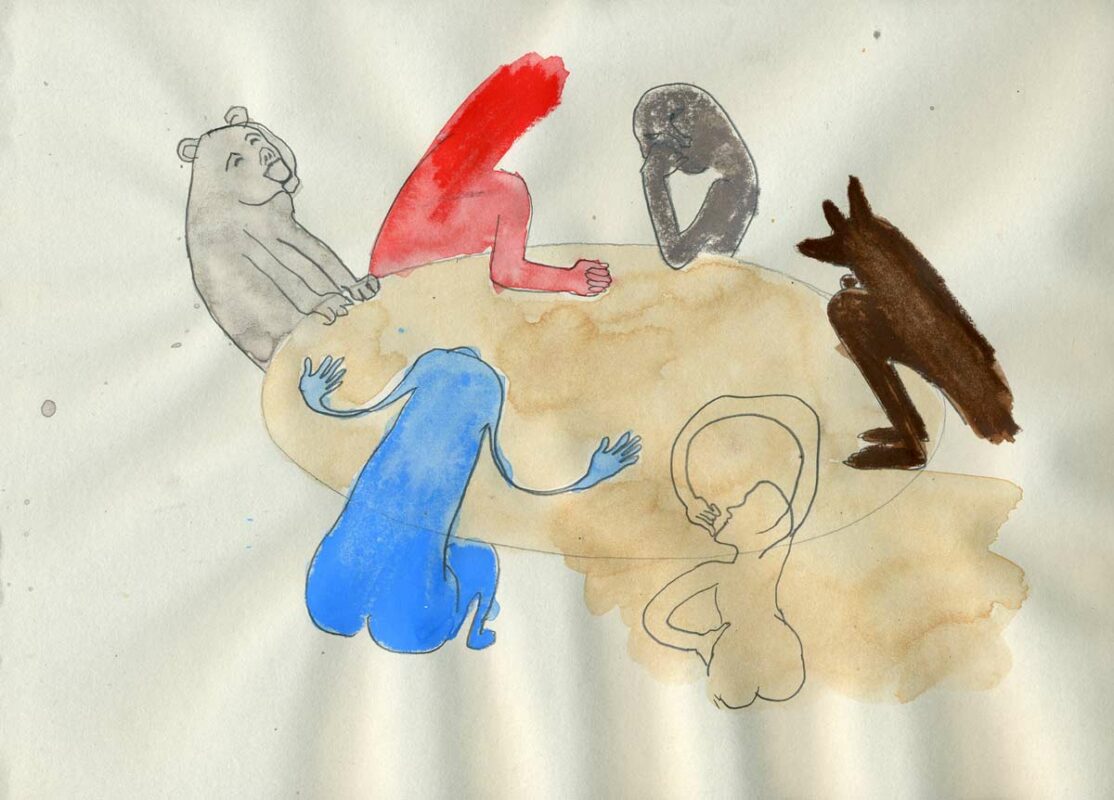 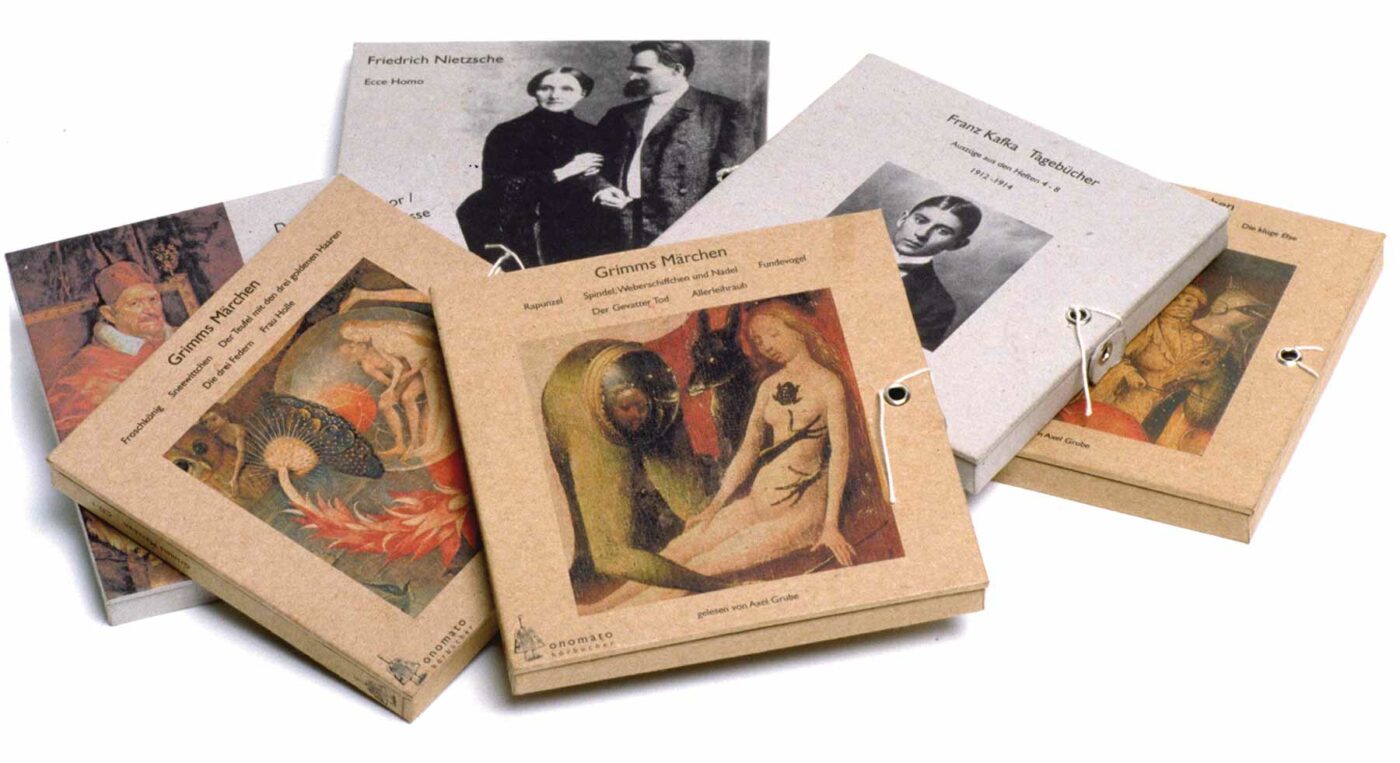 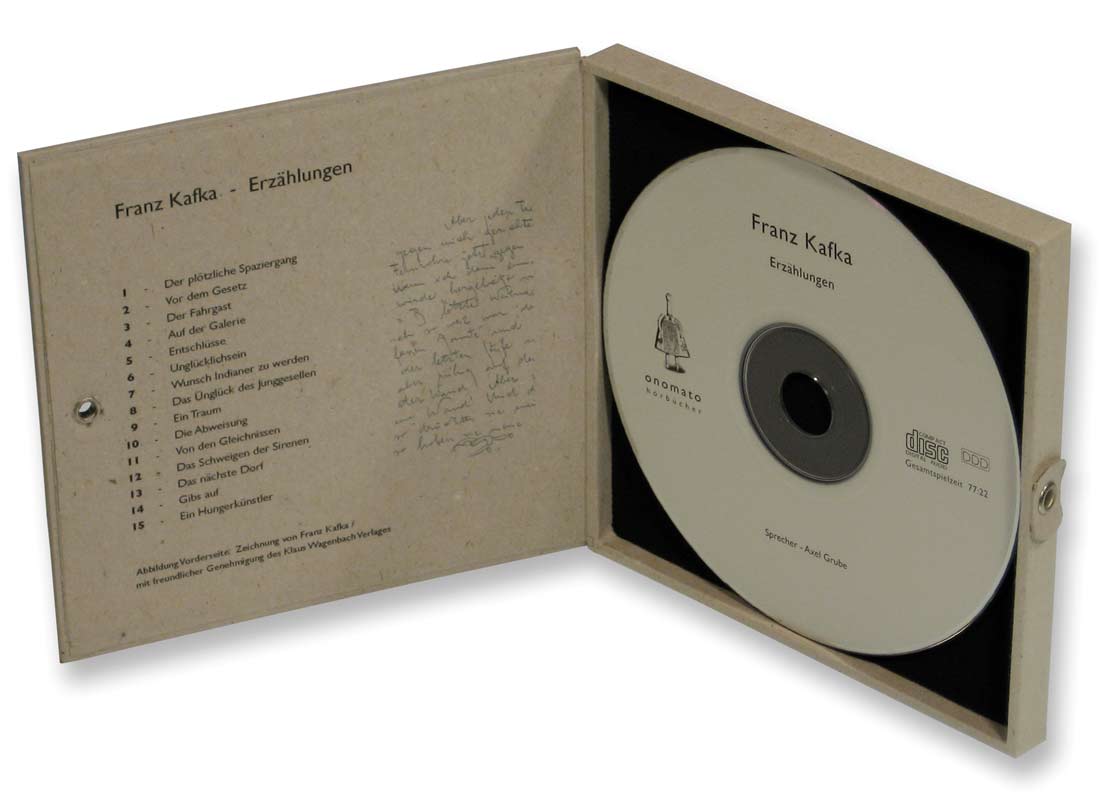 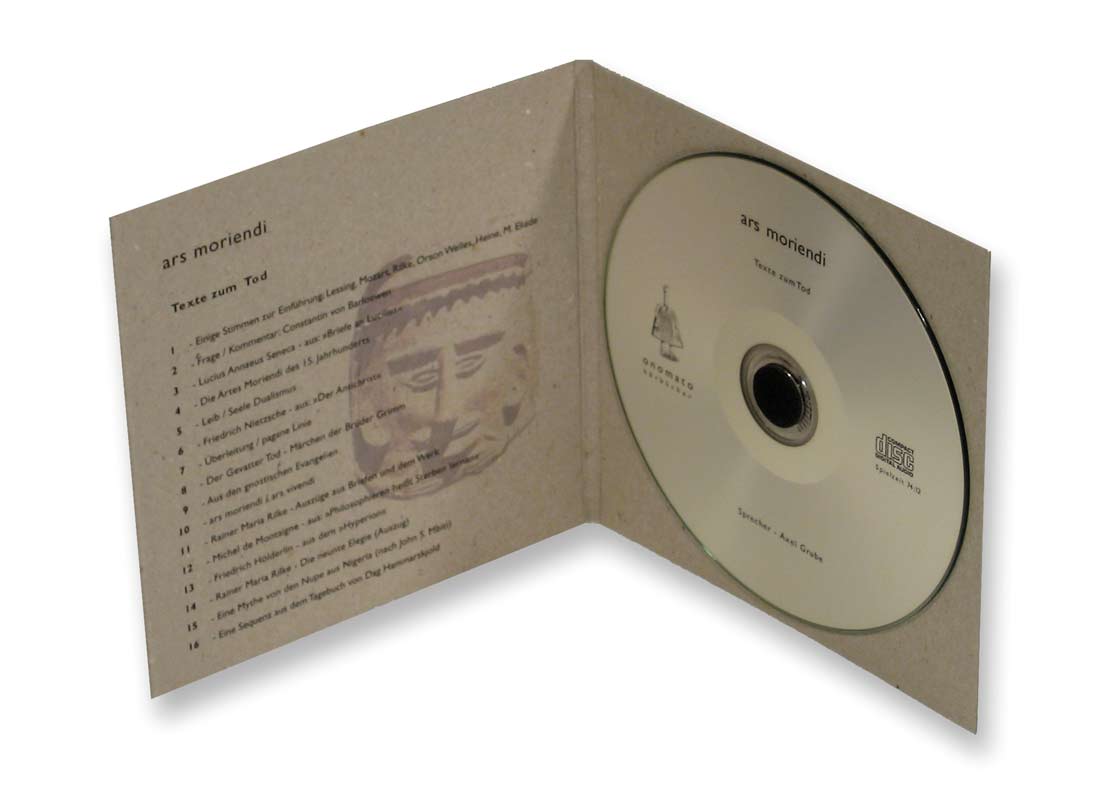 Formative ›relics‹ of the publisher, such as the in-house production of the audio book packaging, are retained. They still represent the correspondence between motivation and mode of production. The “completely different” aspect of the entire orientation is reflected in the handcraft and the bibliophile impression.

The publisher also appears as a social experiment in the sense of a new orientation in the motivation to work. The motif of passion as meaningful participation a real perspective. The term 'idealism' would not fully capture the intrinsic character. The forces that result from the connection to the things themselves and therefore also persist, the fulfillment of passion and the enjoyment of a larger “arc of life” could rather be described as a ›sustainable hedonism‹. As a test also with regard to social change, in which a liberation from mechanical work is heralded, but the accompanying freedom is more likely to be experienced as fear.

It is to be hoped that, in addition to paying attention to the danger of the loss of ecological livelihoods, a sense of the loss of poetic sources of life will develop. After all, poetic culture is not just a 'superstructure', but essence and sublime form for the formation of something as elusive as 'musicality' and the formation of the heart - and thus substantial for a society and global community.