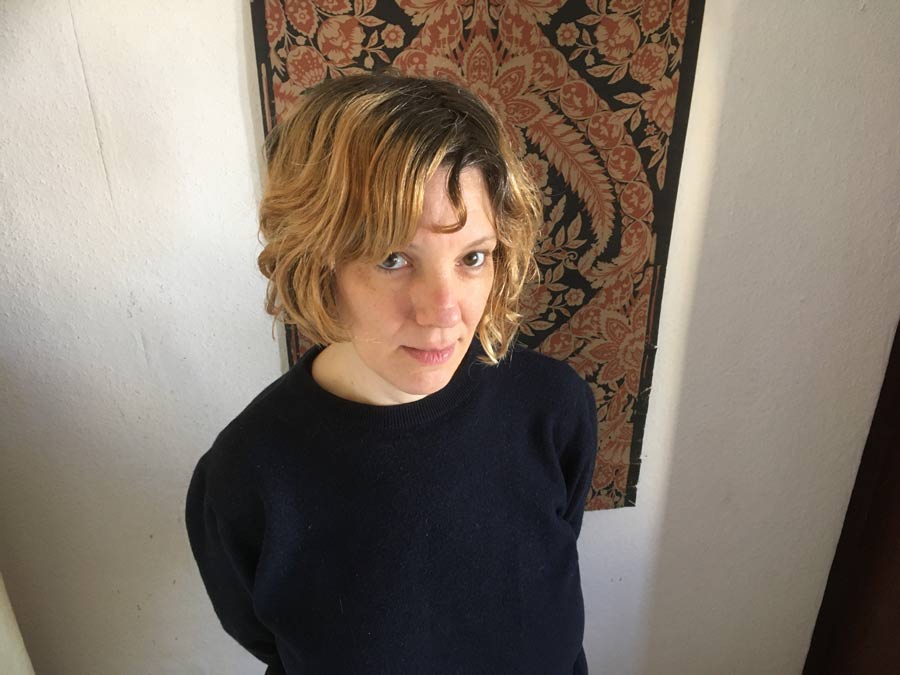 Bettie I. Alfred was born as Iris Andrea Niedermeyer in the Mainz University Hospital in the 70s. She then moved from the stone house in the village to a new Berlin housing estate on the Autobahn. Later, when she was catapulted to a music high school, she moved downtown to a posh old building. She left that high school when she finished high school in order to complete a pedagogical education. The creative, enormously inspiring work with refugee children from war zones led to several performances in Berlin dormitories in the 90s, which finally made Mrs. Alfred give space to a long-cherished wish, namely that of a stage career. She began acting training and at the same time wrote down everything that was on her mind and therefore close to her heart. In the headlights, she found it increasingly difficult to think, but not at all when she was at her desk. In the 2000s she was still on stage a lot and read hers from there ficklely so-called cavity prose.

After turning away from the "reading stage" she turned to the classic work of a writer (sitting, thinking, writing). She wrote, and writes daily, her empty prose (now there are around 1800 pages) and otherwise on her novel "Wie ein Komma im Ablaichsubstrat" ​​(she read excerpts from it in a radio show in 2007, in which she was once an accidental guest is).

The presence of a mostly tragicomic emotional world forms the basis for Mrs. Alfred's work. With the discovery of the radio play (a kind of theater at the desk) as an artistic form in 2017, she found an ideal way to combine writing with the urge to play.
In addition to the novel mentioned, she wrote a screenplay for a psychodrama called Weißzone, several radio plays, most of which have now been realized and successfully broadcast (including Zauderwut, which even made it into the radio play of the month and was nominated by the RBB for the 70th radio play prize of the war blind ), funny essays, long and short stories as well as a few pages of darkest black and white poetry, which she writes with her favorite typewriter, a portable typewriter called "underwood 315", mostly in bad weather.
In 2021 she received a scholarship from the Academy of Arts in the field of radio plays. Thanks to another grant, this time from VG Wort, she is currently writing her unfinished novel.

Since 2017, Ms. Alfred has also been making radio plays (writing, recording, setting to music, editing, editing, marketing) in addition to her daily paperwork. 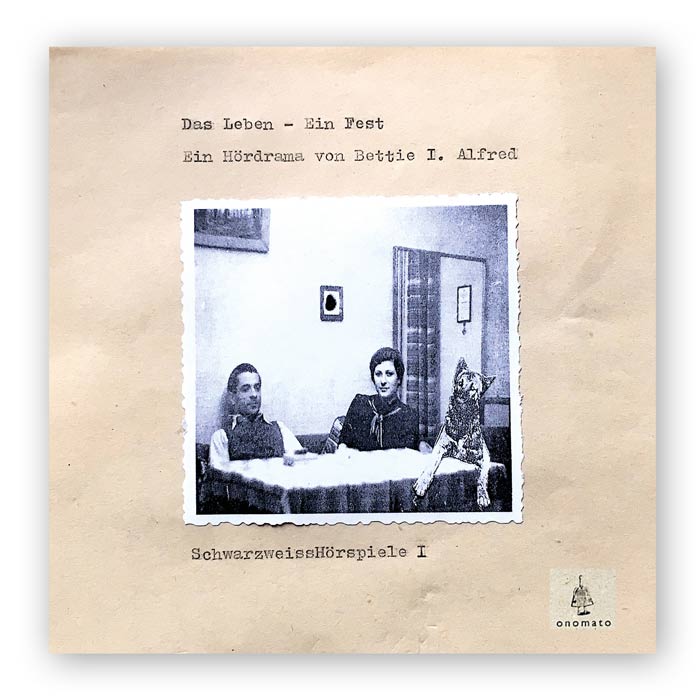 Available as an audio book from July 20th 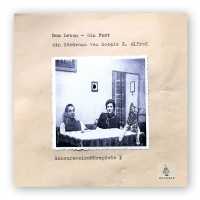 This radio play is about a man and a woman. A couple maybe? You do not know exactly. They talk to each other and yet they don't talk to each other. They talk against each other and past each other. What do you want from each other? They are together alone. Nothing quite, because there is also a dog. In the event of a possible separation, the question arises: who needs him more? Who can take care of him? who loves him more
The house you're sitting in is shaky, it's standing in the noise. A diffuse world wafts around it. Sometimes something explodes. The mood changes. Everything varies. constantly. There are moments of peace and of great crisis. Together alone and each for himself, one is monotropic in the here and now.
The years pass, everything and nothing happens. You wait for each other. The dog then dead, a murder? ... and yet again nothing.

Bine and Frankie live past each other in a never-ending cycle. First with a dog, then without a child. The house is shaky, it stands in the noise. A diffuse world wafts around it. Sometimes something explodes. Everything varies. The years pass, everything happens, a new wife, the dog dies, a murder. And yet nothing happens. A madness in the best sense of Bekett, in which nothing really ticks anymore. What remains are contradiction, irritation, frightening comedy and attractive confusion.

I wrote the dialogue many years ago in a crisis situation. I had to process my childhood and the story of my parents who separated when I was two years old. At the same time, I was also interested in the "together-alone states" of people. And the closeness to an animal instead of to a human. And the shelters. A house was built, which, however, had cracks everywhere and therefore could never leave the outside outside. Something in the piece vibrates and then freezes again. Like us humans. It goes up and down. All the time. You stare into the past and into the future and you don't realize what being together actually means. 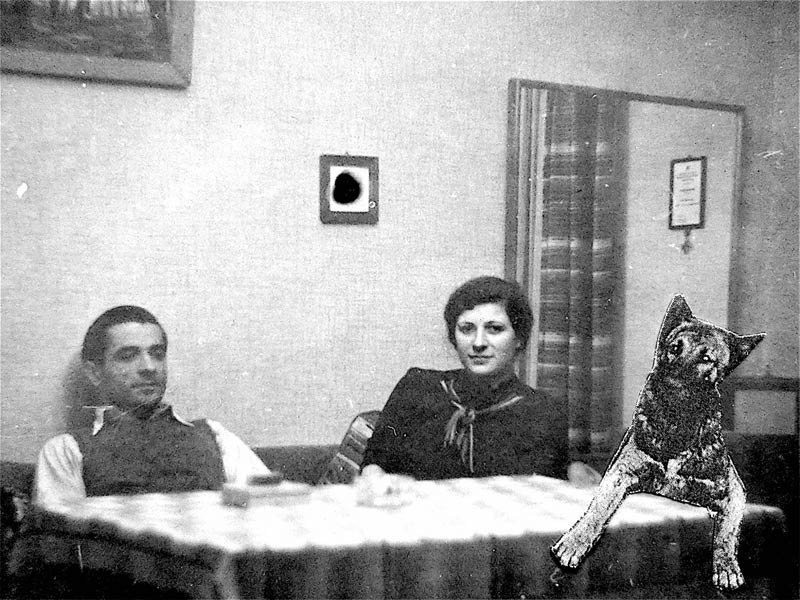 A short account by Bettie I. Alfred on: "Life - a festival"

Audio sample from: Life – A Festival

From the Leipzig newspaper:
“Are there any meaningful things at all? Or is everything you do meaningless anyway?” And does the person seeking meaning inevitably steer themselves into the catastrophe of meaninglessness?” In any case, it made sense for the radio play maker Bettie I. Alfred to ask herself these questions. The jury chose her existentialist drama "Life - a Festival" on Sunday evening as the "Best Long Radio Play". A wonderfully depressing reflection on the sameness of life using the example of a couple with a dog. Years pass in Alfred's fictional play, and lovers Bine and Frenky hardly notice.

From the jury statement of the radio play summer Leipzig:
Dhe Life – A Celebration of Bettie I. Alfred is a radio play that is able to draw you in from the very first moment into the cosmos of its own story, the cabinet of curiosities of the relationship between man and woman. A couple who have gone to the dogs.

A review from Jochen Meissner – KNA Mediendienst, August 04.08.2022th, XNUMX, on the current radio play by Bettie I. Alfred:
From the Cavity – Eight Scenes from a Marriage. A chamber play

"A room is not a room, but a chamber" says in Bettie I. Alfreds radio play "Out of the Cavity". But in what kind of chambers are the eight scenes of a marriage played out? In a camera obscura or in a locked room inside a machine?

The principle on which the chamber radio play "Out of the cavity" by the Berlin author Bettie I. Alfred works was already known to the ancient Greeks. It is not so much the origin of the word from the ancient Greek kamara, but rather the optical principle according to which a small hole in an otherwise closed room creates an upside down and reversed image of the outside world.

A "room is not a room, but a chamber" is the refrain in the play, which the author describes as a "black and white radio play". However, a chamber is also a largely or completely closed cavity in an apparatus or machine. In Bettie I Alfred's radio play, there are two chambers in which the eight scenes of a marriage take place, like in a two-cylinder engine, in which the mixture is alternately compressed and exploded.

That sounds more martial than it is, as this process takes place several thousand times a minute. Without him, the two-stroke would not work.

The “being alone together” can also be heard very clearly in the piece. The woman, spoken by the author herself, arrives as if conveyed over a bad telephone line and meets the much clearer voice of the man, spoken by Iffland Ring bearer Jens Harzer, with whom Bettie I. Alfred had already written the radio plays “Zauderwut ' and 'Scheinwut' (the last two parts of her 'Rage' trilogy).

The woman, a writer, is working on a never-ending novel project “The comma in the spawning substrate”, and the man is an existentially challenged inventor: “I reinvent everything. Of course that doesn't bring much, because everything is already there.” The two live so precariously that their tax advisor laughs at them because of the small sums.

Both of their chambers are visible to both of them through a window in the wall - but this does not necessarily contribute to successful communication. Because his chamber is illuminated by a jupiter lamp, because of which she wears dark glasses. She likes to read and likes letters and books, especially Brinkmann's "Das Blicke-Buch" - meaning, of course, "Rom/Blicke" by Rolf Dieter Brinkmann, an author whose self-reflection with the recording device in "The Words Are Evil" caused a sensation in 1973 had taken care of. The woman reads the man “not with pathos – with love” from the book, but he doesn't care what she reads to him as long as she reads something to him. Of course, the "Blicke" book refers to the camera obscura character of the radio play.

The man has “an extreme soft spot for processes that are far removed from the purely human” and “likes to flee into the world of mechanics and now and then into that of a small insect”. In his character the other meaning of the concept of a chamber is realized - that in which either mechanical work is performed or the unconscious work of an insect. Of course, the two terms in Bettie I. Alfred's "Kammer" radio play, which is also a chamber play, but it is no coincidence that it uses the lowest possible plural, are not really compatible with each other - and surprisingly they work.

Incidentally, the radio play was created in the author's so-called balcony studio - which of course is neither a real studio nor does it have a balcony, but is a third chamber - an acoustic camera obscura. So that empty cavity that is needed to be able to create images. In this case, the somewhat melancholic black and white pictures of a marriage.